When Rebecca Owen, MSN-FNP ’11, DNP ’19, began working as a family nurse practitioner at an organization that provides affordable healthcare to underserved populations in and around Sacramento, she saw firsthand how the homeless and newly arrived immigrants living on the streets and in shelters lacked access for diabetes screening and treatment.

“Typically, the population did not access healthcare unless they faced an emergency. It was common to see patients who had been diagnosed with diabetes 10 years ago but were not taking medication,” says Owen, of her work with Elica Health Centers.

To help these patients, Owen and her team needed to conduct regular blood tests, but there was a lack of labs within walking distance to where residents lived—a major hurdle for many who didn’t own cars or have money for public transportation. To solve the problem, Owen proposed bringing the blood lab to patients, offering diabetes blood screenings in a mobile RV clinic.

“The tests help us understand how in control or out of control their diabetes might be and allowed us to make treatment decisions on the spot rather than waiting for the lab results to return a week later,” says Owen who was named SMU’s 2019 DNP Student of the Year for developing and implementing the initiative.

When the mobile RV clinic first started in January, one of the biggest challenges was building trust among the patients.

“People would often say ‘I don’t need that,’” Owen explains. “But showing up in a place consistently for at least two to three weeks helped to create conversations and build relationships. Being present and meeting them where they are allows us to show them we care, which builds trust to the point they allow us to care for their medical needs.”

Not only did the diabetes RV tests reduce visits to local emergency departments for previously undiagnosed patients, it also allowed diagnosed patients who hadn’t followed through with their treatment return to care and avoid complications resulting from uncontrolled diabetes, including possible death. 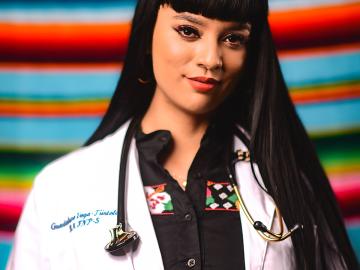 In a photo on her Instagram feed, Guadalupe Vega-Tiistola stands in front of a brightly striped serape, a traditional cloak from Mexico, proudly wearing her new white lab coat that marks her induction...

How Do We Recover from Covid's Mental Health Toll

To no one’s surprise, people’s mental health dramatically declined in 2020 because of the COVID-19 pandemic. In fact, an additional 129 million documented cases of depression and anxiety were reported...

“I was born of a nurse and married a nurse,” Howard “Mike” Milliken, MD, proudly declares when asked why he has such a strong connection to Samuel Merritt University nurses. During his 40-plus years...