Exploring the Synergy Between Yoga and Physical Therapy

With evidence mounting that practicing yoga can improve well-being, more healthcare providers are exploring its use as a therapeutic tool.

The idea of blending the two practices is gaining even more traction as an increasing number of yoga teachers are becoming physical therapists in pursuit of a more lucrative career and deeper scientific knowledge of the human body.

Associate Professor Jason Hardage, DPT, was a physical therapist for 17 years before beginning a yoga practice three years ago.

“I was immediately struck by the potential to interweave the two, and I've been exploring that intersection ever since,” he says.

There is growing recognition of — and evidence for — the use of yoga and mindfulness as supportive health practices in physical therapy, occupational therapy, and nursing, according to Hardage. He says that together the practices can improve people’s strength and flexibility, as well as their balance and mood.

Hardage says students who enter the DPT program as experienced yoga practitioners already have those tools to integrate into their clinical practice.

First-year DPT student Ariel Ross, who is president of SMU’s wellness club and teaches yoga on the Oakland campus once a week, says the ancient practice is about more than physical exercise. Though many people think of fast-paced, sweaty “vinyasa” classes when they think of yoga, she says postures like downward dog were originally intended to open up the body and prepare for meditation.

“You can sit in a chair and do yoga,” says Ross of yoga’s potential to help all sorts of people.

When she becomes a Physical Therapist (PT), Ross says she hopes to integrate yoga’s traditions of mindfulness, breath control, body awareness, and meditation into her patients’ treatment plans.

“Being in PT school and learning all of the different issues people have to manage makes me realize everyone can practice yoga principles,” says Ross. Someday, she also hopes to teach mindfulness to other medical practitioners to ease the stress of working in the healthcare field.

But Elizabeth McDonald is more skeptical about yoga’s potential reach. The third-year DPT student says she now views yoga through a biomechanical lens and realizes that it may not be the answer for everybody, particularly in large one-size-fits-all group classes where injuries can occur.

“I used to help people get a leg behind their head and now I help people who wish they had a leg,” McDonald wrote.

McDonald started doing yoga 21 years ago to help heal her severe scoliosis. A few years ago, she was profiled in the New York Times for her distinctive brand of teaching cannabis-infused yoga classes.

Now, McDonald says she takes a more “artist-scientist” approach to both yoga and physical therapy. Currently performing a clinical rotation at the San Francisco Veterans Affairs Medical Center, she recommends meditation to her patients with post-traumatic stress disorder — though not everyone is willing to try it.

Nevertheless, McDonald says she is figuring out how she can use all she has gained personally from yoga to inform her new career.

“I want to bring the wisdom yoga offers to my PT practice,” she says. 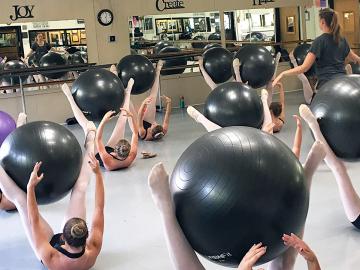 At 16, President Dr. Ching-Hua Wang’s life changed forever when she and other members of her family were rounded up, separated, and sent to work in remote factories and villages around China. They...