When the hospital alarms went off signaling that his newborn daughter was in distress, Cody Bartrug’s instincts were to run toward the emergency medical response.

Now, after spending nearly two years reflecting on his life following the death of his daughter, Bartrug has left his teaching career to become a nurse.

A month into his studies in Samuel Merritt University’s Accelerated Bachelor of Science in Nursing program, Bartrug already knows that he wants to work in a neonatal intensive care unit (NICU) after graduation.

“I have a perspective that not all nurses have,” he says. “The compassion I have for that little child in the NICU is ingrained in me because my daughter was there.”

Bartrug and his wife learned after a routine ultrasound that their baby had a rare heart defect, but was assured that it could be fixed with surgery after the birth. He learned that one of his 14-year-old students had survived the same heart condition so he felt confident.

At just over a pound and a half, Quinn did well on her first day in the NICU. The following day, however, she suffered a significant brain bleed — common in micro-preemies.  Deciding not to put her on a ventilator, the couple held her and prayed until she passed away in Bartrug’s arms.

Under the hashtag #lessonsfromquinn, Bartrug and his wife have shared their journey of loss on Instagram and what it has taught them.

“There’s lots of things we’re learning from this experience and from her life,” he says.

One of the biggest lessons was to follow his passion to become a clinician and Bartrug says he is thriving in the fast-paced ABSN program.

“It is bringing me full circle,” he says.

The medical field has long captivated Bartrug — from his frequent hospitalizations as a child for asthma to teaching health science to high school students. While his family pushed him to pursue a medical education, he fell in love with teaching.

He took a position at a high school in an impoverished area of West Virginia where there were a lot of drugs and few job opportunities. It was difficult to keep his students interested in science so Bartrug enrolled in a graduate program in intercultural studies to gain skills in community development and humanitarian outreach. For his final project, he chose to focus on building bridges between healthcare disciplines in hospitals.

Moving to Marin County, one of the wealthiest communities in the country, was a “culture shock,” he says. His new students were high-achievers who expected to attend leading universities and Bartrug taught them science through a medical lens. In the meantime, he was also busy working with two partners to create a charter school that would highlight racial diversity in the classrooms in a predominately white county.

Following the death of his daughter in 2016, Bartrug and his wife decided to take time off and slow down. While grieving, they learned an orphanage that their church was building in India would be named after their daughter.

“Part of her ongoing legacy will be to bring light to children who currently live in the dark slums of India without family, food, water or shelter,” Bartrug wrote on Instagram just a few days after Quinn passed away.

The following summer, Bartrug traveled to a remote village in southern India for the opening of the “Quinn Lucille Bartrug Memorial Orphanage” and plans to return there every two years.

“We knew what her name meant, but we didn’t know it would be her legacy,” says Bartrug.

His gratitude for his daughter’s continuing gifts was on full display when he posted his Samuel Merritt University acceptance letter on his Instagram page in February.

“Through severe loss, my passions have grown,” wrote Bartrug. 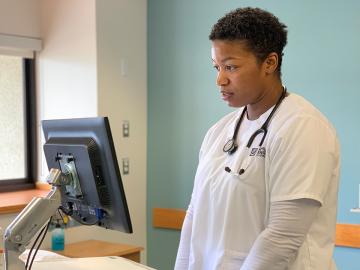 Megan FitzGerald BSN ’19 was nervous during her interview for an internship at the Palo Alto Veterans Affairs (VA) Medical Center. As a Samuel Merritt University nursing student who had just completed... 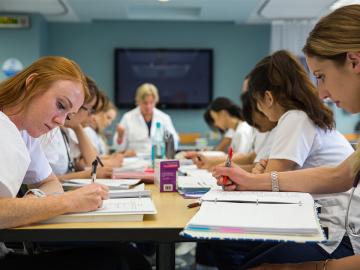 Samuel Merritt University (SMU) alumni earn the highest salaries among undergraduates from all other California universities and from nearly all schools nationwide, according to the recently updated...