No one understands that better than Melissa Wolf, a physical therapy student and longtime fitness enthusiast who is determined to bring a more wholesome approach to bodybuilding.

Before Wolf participated in her first bodybuilding competition a year ago — winning first place in the novice category — she viewed the sport as encouraging unhealthy eating habits and emotional insecurity.

“I thought it was kind of a twisted sport,” she says. “There’s a lot of stigma around bodybuilding and I definitely saw it that way.”

Now a first-year student in Samuel Merritt University’s Doctor of Physical Therapy (DPT) program, Wolf is taking what she calls a more scientific, evidence-based approach to her own training.

What that means to her is eschewing the traditional type of bodybuilding diet that shocks the metabolic system and can result in aggressive rebound binge eating and body dysmorphia following competitions, particularly among women bodybuilders.

“I decided I would train and compete in the most healthy and sustainable way,” she says.

Wolf, who calls herself “a competitive physique athlete,” started lifting weights about five years ago without the intention to compete. Still, Wolf found herself admiring the bodies of professional bodybuilders and was particularly drawn to bikini competition so she decided to seriously pursue the sport.

Instead of relying on what she calls “starving yourself at the cellular level” by eating a diet of ground turkey and egg whites five times a day to build muscle mass as bodybuilders often do, Wolf says she eats bacon and whole eggs as well as chooses foods from every category of healthy nutrition.

“People suffer emotionally and physically from bodybuilding,” she says. “That’s changing, but there really needs to be a push toward a more wholesome approach.”

Now training for the World Beauty Fitness & Fashion (WBFF) show in San Francisco on June 16, the self-described “science nerd” is using her DPT education to inform her training and hopes to lead by example in making bodybuilding a more sustainable sport.

“I think physical therapy is a super wholesome process and is helping me fill in the blanks of what bodybuilding lacks,” says Wolf.

Wolf chose to participate in the WBFF competition because she says the organization promotes overall fitness and an athletic physique that is “strong and sexy” while not forcing contestants to appear “so lean and peeled down.”

More accustomed to being in the gym than on the stage, Wolf is getting used to the idea of posing and clinching her abdominal muscles for 10 minutes straight during shows.

If she wins the June competition, Wolf will be eligible to go pro and compete for the WBFF world title in Las Vegas in August. She hopes her success will help her use her PT education to help fellow athletes.

“I want to make a name for myself so people care about what I have to say,” says Wolf. “I want to work with the bodybuilding community in hopes of showing them it’s possible to promote healthy habits and win.” 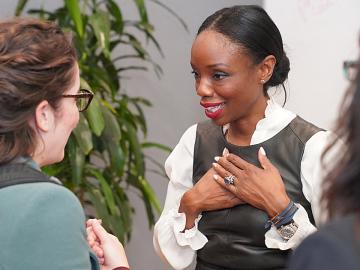 For years, research has shown that children who experience trauma such as abuse, neglect, and parental divorce, or who have an incarcerated parent are at higher risk for poor health outcomes, even... 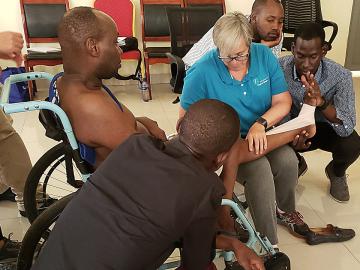 Doctor of Physical Therapy Professor Sharon Gorman recently returned from a U.S. Department of State-sponsored trip to the small central African nation of Burundi, where she trained physical...